Memorial Service for the Homeless 2018 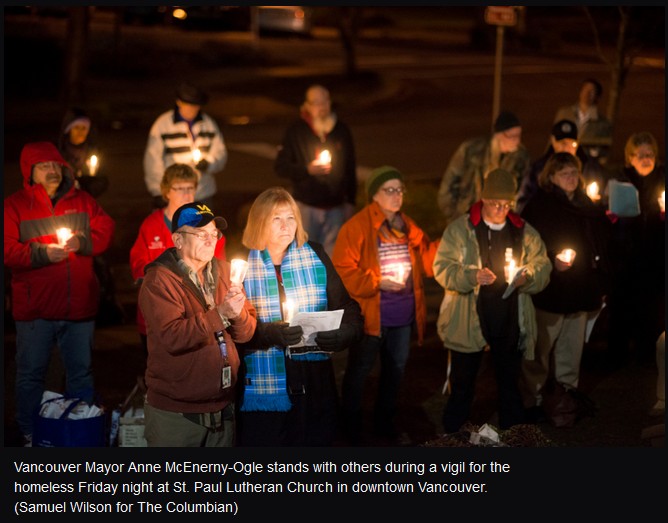 It was a beautiful gathreing of people on the longest night of the year for an outdoor candlelight service to remember & honor our unhoused neighbors who have died this year.

Article in the Columbian:

On the winter solstice, the longest night of the year, a crowd gathered outside St. Paul Lutheran Church in Vancouver to remember homeless people who died this year.

During Friday night’s annual vigil, nearly two dozen people with local connections were recognized through song, prayer, poems and calls for action. Similar services took place around the country on what can be a particularly cold night. Friday’s low temperature was around 35 degrees in Vancouver, according to the National Weather Service.

As an employee of Council for the Homeless, Caroline Lopez said she gets to know people who are searching for housing; one of those people was Chris Breitenbach, who died this summer. 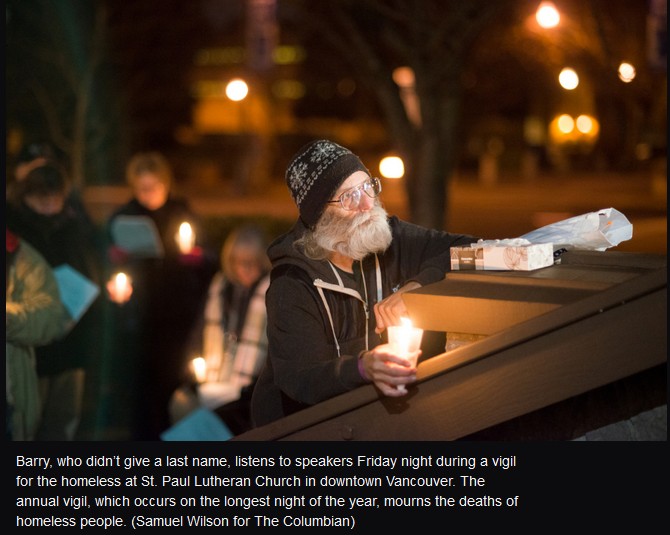 “He was just so sweet. When I think of him all I can remember is love,” Lopez said to the crowd gathered in front of St. Paul’s steps. The church hosts a winter shelter for men. “All he wanted … was to be with his son, to be housed with his son.”

Lopez offered a Buddhist prayer about compassion and led the group through a meditation. 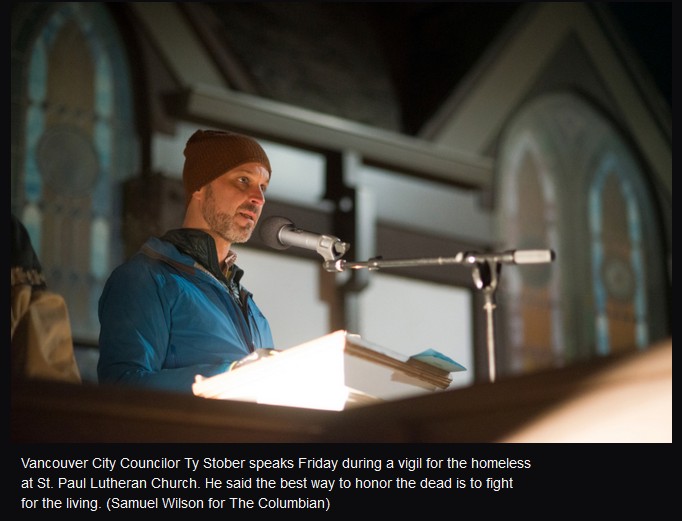 He said Vancouver has dedicated employees who work tirelessly to build trust with homeless people, but he said he was embarrassed about information revealed in Friday’s Columbian article that showed stricter enforcement of the city’s camping and public storage ordinances.

“As a council we’ve attempted to exhibit respect for all residents no matter their income bracket or housing status,” he said. “While our laws are strict, our directive to staff has been to approach everyone with compassion and empathy.”

He said that hasn’t happened in the last few weeks and he’s working to correct conditions. He acknowledged the recent opening of the Vancouver Navigation Center, where people can come in out of the elements and take care of their needs during the day, as well as the opening of housing projects such as Meriwether Place and the upcoming Bridgeview Resource Center.

Homeless advocate and founder of Outsiders Inn, Adam Kravitz, said he knew nine people whose names were said at the vigil. He said he was thinking of the possible names that could be recited at next year’s vigil, people who may never be housed for whatever reason, whether due to mental health, addiction or not finding success in the system.

He said he would like to see a more trauma-informed approached when it comes to housing people who have issues with mental health and addiction, as well as an end to division and hate. The Columbian article “shows how deep the injustice goes,” Kravitz said.

The vigil closed with the crowd singing “Amazing Grace.”