A surprising thing happened when Vancouver leaders decided earlier this fall to lift the citywide ban on public camping:

In just a few weeks, a residential neighborhood a 10-minute walk from the heart of downtown became host to a homeless camp that grew to 150 people. Tents lined parking strips, and sleeping bags, shopping carts, mattresses, coolers, garbage, luggage and bike frames collected on street corners. Armed volunteers showed up to keep the peace.

"As the homeless population grew in Vancouver, we'd been hearing lots of concerns about trash in the neighborhood. It would be so great to have complaints about trash now," said Amy Reynolds, director of programs for the nonprofit that runs Share House, the shelter around which the camp formed. "Now what we're hearing is, 'Somebody is defecating in my yard. People are undressing outside my house. People are having domestic disputes, getting in screaming matches and physical fights, next to my parked car.' 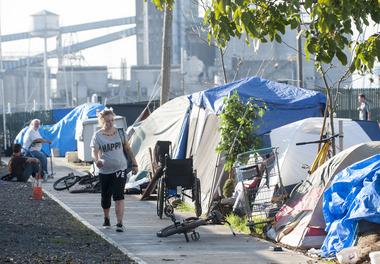 It also wasn't what anyone expected. City leaders thought allowing public camping at night was a smart, quick response to signs that federal officials plan to crack down on communities – such as Portland and most of its suburbs -- that criminalize homelessness. Advocates heralded it as a step toward new understanding and a more humane, constructive approach.

Instead, they all learned a valuable lesson: Without planning and forethought, lifting a camping ban can do more harm than good.

Bans on public camping are the norm in major U.S. cities. A 2014 study by the National Law Center on Homelessness & Poverty found that 34 percent of 187 cities surveyed banned camping in all public places and 57 percent banned it in certain places, such as parks. The number of citywide camping bans has grown by 60 percent since 2011, as communities responded to a post-recession rise in homelessness by giving police more authority to move homeless people.

This summer, U.S. Justice Department lawyers weighed in on a lawsuit filed by a group of Boise homeless people convicted of violating city camping laws. Their take: If a city lacks adequate shelter space, banning camping amounts to criminalizing homelessness and violates the Eighth Amendment to the U.S. Constitution.

That situation, not enough shelter beds to meet demand, is the reality in Vancouver, Portland and pretty much every other city on the West Coast. It's one reason Portland's camping ban goes largely unenforced, why small tent communities form each night along the Willamette Riverfront, off Interstate 5 and wooded areas along Max lines and the Springwater Corridor. Police will intervene if camps grow too large, too obvious or too unruly, but by and large, Portland officers say they have nowhere to send homeless campers. So they leave them alone.

As far as advocates are concerned, anti-camping laws are actually an obstacle to ending homelessness. Someone who spends their day worrying about finding a place to sleep or a safe place to store their stuff is less likely to find a job. Someone repeatedly ticketed for camping can amass a criminal record that makes renting an apartment, particularly in a hot real-estate market, all but impossible.

The federal government's Boise statement lacks the power of law, but resonated in many other cities as part of a broader push by the Obama administration. The U.S. Department of Housing and Urban Development's updated application for federal homelessness money now requires communities to describe steps they are taking to reduce the criminalization of homelessness.

Vancouver is the first city to allow public camping in response the Justice Department's Boise statement, but likely not the last, said Eric Tars, a senior attorney with the National Law Center on Homelessness & Poverty. Anti-poverty activists in Eugene have been pushing the City Council for a similar shift.

"The reason a lot of cities turn to criminalization is because it's a way to hide the problem. When the community sees visible homelessness says, 'Do something,' it's easier to criminalize than have hard conversations about building housing and expanding the mental health system," Tars said. "The federal government is now saying that if you choose that route, there will be a cost."

Vancouver leaders were worried enough about the Boise statement, and its implications for other jurisdictions, that they voted in September to allow public camping from 9:30 p.m. to 6:30 a.m.

"Our city attorney felt it was a wise step to take," said Chad Eiken, the city's community and economic development director.

Vancouver and Clark County have seen a spike in both numbers and anecdotal evidence of homelessness in the past two years. Redevelopment along the Columbia River removed some out-of-sight camping areas. A spike in rents, part of the region-wide affordable housing crunch, has both added to the homeless population and made getting inside harder.

"Many of these folks in that tent city are on lists, they have rental vouchers or subsidies they'd like to use. But they can't find a place to rent, so they're still homeless," said Andy Silver, executive director of Clark County's Council for the Homeless. "Given the housing crisis we're in, we needed to do more thinking about where people camping legally would go."

They went to the streets around http://sharevancouver.org/share-shelters/">Share House, Vancouver's largest yearround shelter and the only place homeless men and women can get three hot meals a day.

Several West Coast communities, including Seattle, have legalized tent cities as one answer to the need for more short-term housing for the homeless. But the encampments embraced by governments and advocates for the poor are well-organized, situated away from residential neighborhoods and equipped with an adequate number of showers, Dumpsters and portable toilets. Drugs and alcohol are usually not allowed. The Right 2 Dream Too rest area in downtown Portland has won grudging support from city leaders in large part because of its strict entrance policies.

In Vancouver, the new encampment had no clear leadership, no clear policies and no infrastructure.

"You have a lot of people there because it's closer to services than where they were camping, so in that regard it's a better situation," Silver said. "But you also have some people who are there to prey on the most vulnerable in that population."

The neighborhood around West 13th Street and Lincoln Avenue was downtrodden before the ban went away. The houses are small, faded and ramshackle, and a few are boarded up and abandoned.

The camp turned a tired-looking neighborhood into a downright ugly one. At its height in late October, dozens of tents lined the parking strips separating houses from the streets, luggage and garbage bags filled with people's belongings, cigarette butts, hypodermic needles, food wrappers, dirty clothes, bags and buckets of human waste and bikes in various stages of disrepair. The crowd tended toward young and rough looking. Police were concerned about the prospects for trouble – for sex trafficking and drug abuse in particular – even before armed volunteers began showing up to help keep the peace.

"We've always had a few homeless people, but they just took over," said Share House neighbor Greta Manning. "I looked up, and my block had been turned into a campground for bums. Who thought this was a good idea?"

Nobody. City leaders and homeless advocates say the mistake wasn't in lifting the camping ban, but not understanding that simply allowing camping wasn't enough.

"If we had to do it over again, we'd be looking a bit further ahead at what might happen and maybe taking a little bit more time to try to understand what could happen," Eiken said.

In hindsight, city officials say, they could have waited until a new day shelter opened – now slated for early December. They also could have worked with local churches to establish, as Seattle has, a policy that would allow faith-based organizations to designate spaces for campers. City leaders are doing that now.

Those are Band Aids, however. The long-term answer is more housing, the same obstacle to ending homelessness facing almost every other U.S. city. 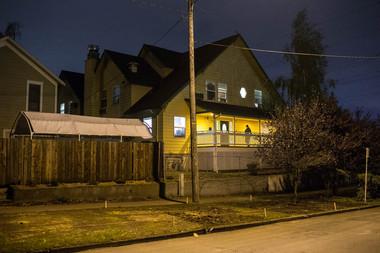 Wood stakes show where tents were set up outside the Share House homeless shelter in Vancouver, Wash., after campers left. By Wednesday night, all the campers were gone. Thomas Boyd/The Oregonian

In the short-term, a well-meaning policy choice resulted in exactly the kind of interactions police and city officials were trying to avoid. Late last week, Vancouver police began warning residents that they'd soon be clearing tents left out after 6:30 a.m. They worked with social service providers to identify campers with disabilities or unable to leave on their own, and those with outstanding arrest warrants.

"From my perspective, on the front end, the lion's share of the homeless problem has fallen on the shoulders of police," said Vancouver Chief James McElvain. "One of the best things to come out of this situation is that we're all in it together now. People in Vancouver understand that we can't expect law enforcement to solve these social-service problems alone, that it's going to take a large team."

By Wednesday, the campers were gone, and city crews driving backhoes and wearing gloves and other hazmat gear cleared away the remnants. About a dozen people received vouchers for motel rooms. Others escaped to a winter overflow shelter that opened Nov. 1.

And some simply disappeared; they went back into the woods, under bridges or to other hiding spots farther from services but also from the public eye.

This email address is being protected from spambots. You need JavaScript enabled to view it.